What’s Mine is Yours and what’s Yours is Mine?

With one of the most beautiful website in the Alarm security industry, My Alarm Center stands as a premier alarm service provider, whose services extends to over 40 states in the nation. An alarm company with cutting edge innovation and service.

My alarm center offers security services to both residential and commercial customers, its range of service cuts across, home security and monitoring, Home automation, flood and CO2 monitoring, business security and personal emergencies. They utilize wireless systems for all their equipment and do not offer landline monitoring.

Here’s a look at the pros and cons of being protected by My Alarm center.

My Alarm center prices depends on the type of monitoring choice

Installation cost: depends on the type of monitoring

Activation: depends on the type of monitoring.

Monitoring fee: The basic plan of MyalarmCenter security system begins at $34.99, they offer a promo of free 3 months. Monitoring fees increase with higher packages up to $59.99 across the three available packages.  This is right in the middle with some of the other top providers such as Vivint or Link home. 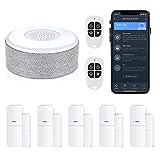 My Alarm center Security Equipment’s are manufactured by Honeywell and GE equipment. The security equipment are all wireless and utilizes cellular and interactive monitoring.  A basic My Alarm Center home security package includes:

My Alarm Center Systems are installed by their own professionally trained technicians. The cost of installation is added to the total activation cost of $99. Each technician is professional and thoroughly trained. The installation process is done in three easy steps:

Decide: call their customer service on 866-484-4800, get a quote select a package and set up an installation time.

D- Day! : The installer arrives and set up the unit. Wireless systems are generally easy to set up.  Shouldn’t take more than 3 hours.

What makes them different from other home security providers?

Home automation: My alarm center system is wireless and fully set to control all Z-wave gadgets available in your home via the control panel

My alarm center customer service is available 24/7 on phone or via the contact form on their website.  This is better than most others reviewed who have limited support hours.

Providing Quality alarm services is the paramount function of an alarm company. My alarm center tries to do this with their innovations and systems. Customers are advised to clarify all gray areas before signing the dotted lines.