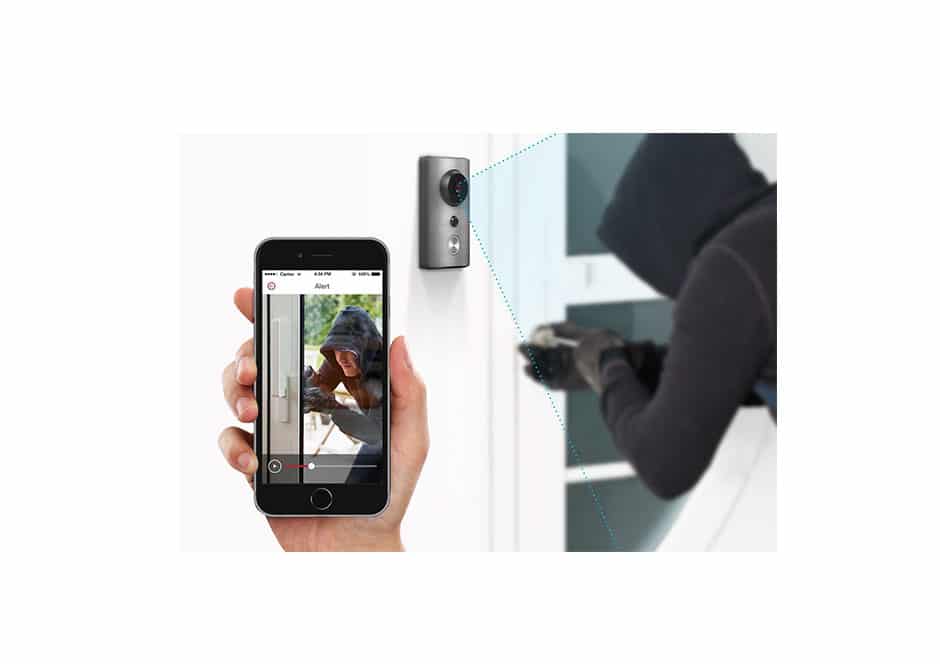 Last Updated: August 6, 2018.  The new smart doorbell security cameras are taking the market by storm.  This best doorbell camera creates the ability to view people coming up to your door, triggering notifications to any ios and Android smart device.  They bring peace of mind to those who are nervous about answering the door without knowing who is there.  These live video doorbells also serve as a great ‘peephole’ and now those at home don’t have to lift up the blinds to peek at who the visitors are.

Pros and cons of having a Security Doorbell viewer at the front door:

For those looking to buy a new doorbell security camera here are the top 3 reviews:

In July of 2017, Frontpoint updated their doorbell camera to the new ‘Slimline’ model shown above.

FrontPoint recently added a doorbell camera to their lineup in late 2016.  They use a third party product, Skybell, and integrate it with their app so you get a full security system with your doorbell hd camera.  This is a great all around wireless doorbell camera although slightly bulkier than other top picks.  It looks less like a typical doorbell you would ring and more like a camera/tech product. It works when the motion detection is triggered or when someone presses the doorbell.  We rate the appeal a 5 of 5 (previously 3.5 of 5 and ranked 2nd until new version hit) and functionality 4.5 of 5. 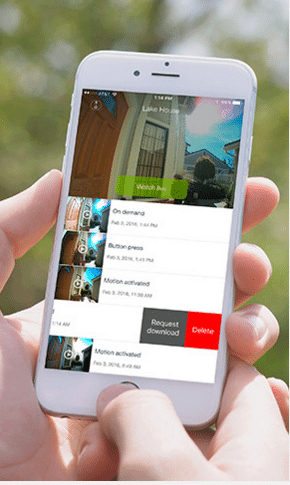 To add this to a Frontpoint security system users need to ask for it as they are not adding it to any promotions right now.  They do give you a discount so it is $160 over the $180+ users would pay for it on the internet.

The monthly cost is going to be around $50 which will include 24/7 monitoring of the security system and doorbell video camera.  Frontpoint has done a great job at adding this to their lineup. Users who use the Skybell cam through Frontpoint gives them one app to control all home automation and security features.  Better than logging in and out of several apps to see what is going on in the home. 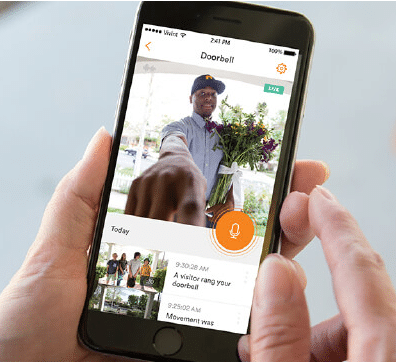 Vivint is the only security company (as of 2016) to create their own doorbell camera and not use a third party partner.  It integrates with their app flawlessly.  As soon as someone rings the doorbell, app users are notified and can swipe to answer and then talk to the person on the other end.  When talking to the user, try to have wifi connection with a good wifi network or cell phone data will be burned quickly. It works similar to other models; Video recording starts when the motion sensor is triggered or someone rings the bell.

You can get Vivint doorbell smart cam in their automation package.  Monitoring is going to be $59-79 a month but this is a full security system.  The sky panel is touch screen and also connected to the doorbell cam. The system lets you view in real-time high-definition video through the Vivint in-home control panel or the mobile app. To review the videos and images, you can check the company’s Space Monkey local Cloud service device.

This is the costliest option of all, but that comes with great quality.  Vivint has close to 1 million home security users already with a 20-year history so glitches in their app have already been worked out.  This company thrives on innovation so for users that want more than just a doorbell camera then this is your best long-term option. 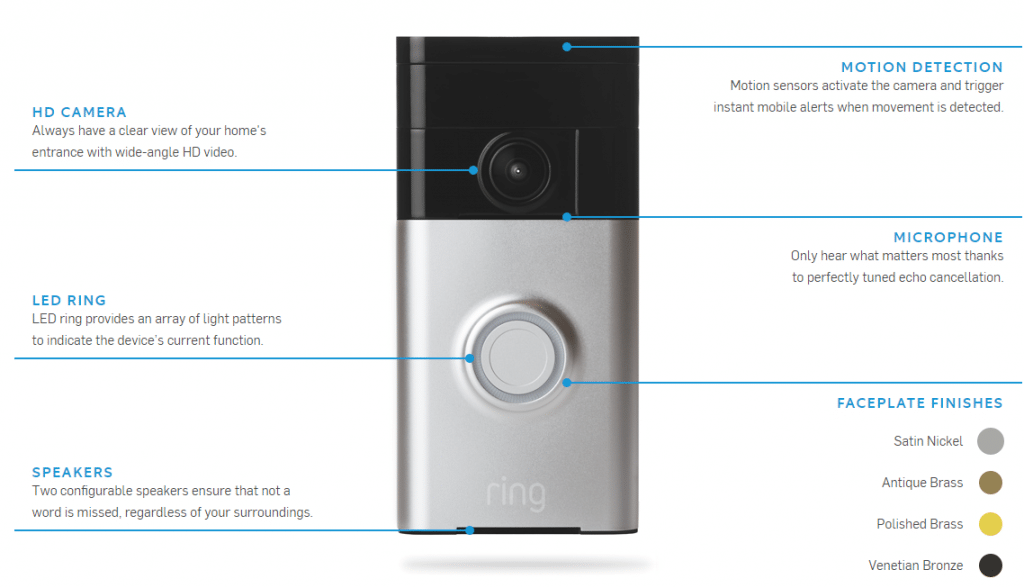 A ring is the most well-known, popular and considered one of the best doorbell cameras in the market today. They are the original inventors of this product and re-branded from their original name, ‘Doorbot’.  It is not as slim as Vivint’s but much better looking than Frontpoints above.

They have a The Ring PRO version for $250 (free shipping) with a home security system add-on bundle.  There is also a $195 version which is hard to find the difference between the ‘PRO’ version.  Users download the Ring app and then sync to their wireless doorbell with a camera, add security passwords and users and then it is up and running.  Once the flat fee to purchase has been paid, Ring gives users a free 30 day trial of storing footage to the cloud.  Because it’s not connected to a DVR or any other kind of backup storage it is hard not to feel obligated to do this.  It is $5/mo, so affordable but users essentially can’t use the product for security unless that is paid.

You can set up ‘zones’ on how far out the camera sees and records motions.  For instance, you can set 5-25′ away. Try to get a wifi extender to connect to your wi-fi network to ensure that the signal is strong and all videos will be streamed in real-time without any issues. The farther away, the more pictures and recordings you will have.  Every home is different, try to set it up so that your doorbell cam is not taking pictures of every passing car.

When the user rings the doorbell, your smartphone is notified and you can then view a live stream of who is there. The doorbell can be powered by rechargeable power battery or Hardwire Power Supply(8-24 VAC).

You can also ‘answer’ it and talk through your phone to them at the doorstep.  This is a great feature if you are at work and need to take a package or talk to whoever is at the door.

Recordings and pictures are saved so if needed you can look up the history of who has been at the front of the home.  We recently used this at Halloween (2016) to see the punk teenagers who walked up to the doorstep and smashed our pumpkins on the sidewalk! 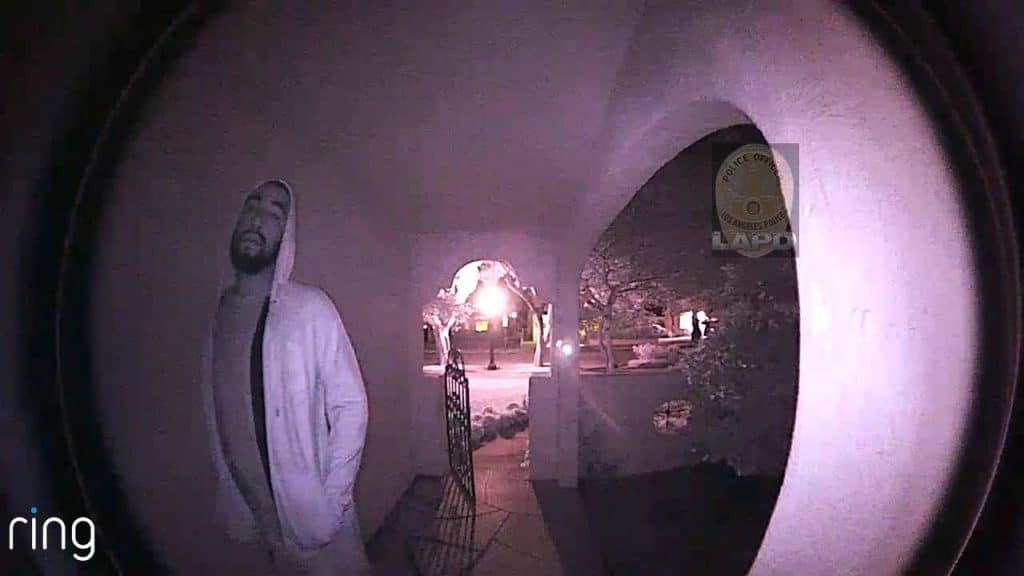 Smart door viewers are a great home automation product and if you plan on living at the location for 2+ years should be bought.  These do replace traditional doorbells and are not practical to move with you to the next home, although can be done.  Your ‘ding dong’ noise will stay the same when the doorbell button is pushed (as long as the doorbell wires are installed correctly. Our second choice Vivint will install it for you, with the other 2 products users are on their own.

As long as you don’t buy one that has negative reviews or no support then you are purchasing one that is a ‘best of’ contender.  With the top 2 choices, users can integrate their doorbell camera system with their home security system. With option 3, it acts as a stand-alone device and users can pay for cloud backup storage through the Ring app.

Other things users should consider to keep crime away from the front of their homes are:  keep it clean, have a security sign, use outdoor cameras around the home and put neighborhood watch stickers.  Stay safe and let us know your thoughts and any experience with the new tech security gadgets.

Do people steal doorbells and their cameras?

Usually no. Most thieves give up if you have the camera installed properly, as it is screwed tightly to your wall, door, or whatever. However, in the rare instances where thieves to manage to steal such a camera, you’re in luck because you’ll have a clear recording of the thief in action. This way, you can call the police and make their jobs all that much easier.

Are doorbell cameras worth it?

Yes, they are. Some people might think that they’re worth it only if you live in a bad neighborhood. Far from it. Burglars and thieves have gotten new tactics up their sleeve and they now travel to richer areas as well because they know they have better chances of finding something worthy to steal instead of just getting regular cheap items.

Can burglars disable the Ring doorbell in theory?

If you have no other security device at home, and your Ring camera works via Wi-Fi only, then there are chances that a smart enough burglar might disable it. We recommend you take all the necessary precautions and speak to the manufacturer about backup security measures that you can take in this type of scenario. Though rare, it doesn’t mean that it can’t happen to you, so it’s better to be prepared than to be caught off-guard.

How do I block my neighbors security cameras?

If your neighbor has their camera pointed way too much at your house, then the simplest solution would be to ask them to redirect their camera’s angle. Otherwise, you can try placing object in front of the camera’s view towards your building. Or you can install a special film on your windows if you’re extra paranoid about neighbors spying on you. If all else fails, try installing a powerful light towards their camera.