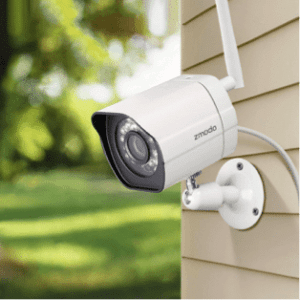 Wireless security cameras from Zmodo are easy to set up.

With a reputation for stylish smart home security products that are simple to set up and use, Zmodo security camera products cover a range from doorbell cameras to business surveillance systems. Zmodo offers a lot of options that users appreciate, from pivoting home cameras to let you take a look around the house while you’re away to an app you access on your smart device. 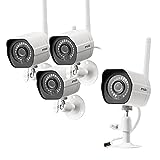 What Are Key Features of Zmodo Security Camera

The Zmodo Snap Pro is one of the smallest smart surveillance cameras on the market. The camera measures 2.83″ x 2.67″ x 1.45″. It fits any spot around your home – doorways, porches, shelves, coffee tables, and window ledges and other tiny spots It weighs 6.17oz, which puts a low strain on your walls

No wires to set up. You can use the optional mounting bracket to install the outdoor security camera anywhere out of reach and out of view.  You can swivel and position the camera to get the best viewing angle while doing remote viewing from the Zmodo security app.

The Zmodo outdoor security camera has a wide viewing angle and can see 180 degrees and less blind spots.

The indoor/outdoor security camera uses rechargeable batteries and comes with the charging cable. The removable battery can be fully charged in four hours. The battery’s status can be checked in the app or you will receive an alert when the charge gets low.

Unbox the high definition camera. Plug in the hub. Put the batteries in. Download the mobile app. Sync the app to your WiFi and then scan a QR code. Name your security device. That’s it!

The Zmodod wi-fi cameras have you covered, indoors or out. With an IP54 waterproof rating, the outdoor cameras ready to handle the elements.

Add Up To 4 Snaps

One Zmodo hub can pair with up to four HD video quality cameras. Set up your first Snap Pro and when adding other Zmodo wireless cameras, the WiFi information and connection status are shared automatically between cameras which saves you time and effort.

Zmodo has night vision capabilities detecting movements in the dark. The two-way audio will enable you to see, hear and communicate anyone from anywhere in the house.

The Zmodo Snap Pro comes in a   limited warranty and lifetime US-based tech support. The Customer Care team is based in Champaign, IL.

Zmodo company offers a range of options in one of the most popular home security categories available today, doorbell cameras. There are three models available — base model Greet, Greet Pro and Greet Universal, which has its own indoor chime and does not require a mechanical bell as part of your system. They are the biggest competitor to the Ring smart doorbell as of 2018. 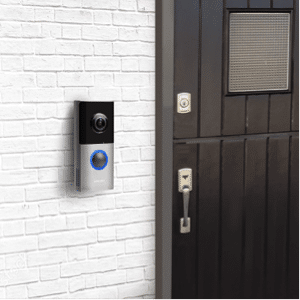 The Greet Pro Doorbell is a stylish addition to your home’s security.

All the models use a PIR sensor for motion detection and activation, and all feature full duplex 2-way audio to allow you to communicate with visitors at the door. The features vary from there, with the Pro and Universal offering a full 1080p video resolution at 25 fps, while the base level Greet features a 720p video image. Both the Greet and the Greet Universal rely on a 2.4Ghz WiFi connection as the only option they are compatible with. The Greet Pro can use a 2.4 or 5Ghz.

The company specializes in security cameras, and so there is a range of models available that are designed to work around the house or business. Zmodo products are made to provide great video images of all the things that move around the place when you can’t be watching it all.

The Zmodo Pivot lets you scan around the room by remote control for a better picture of what you’re missing when you’re away. With a look that is a bit like a mini droid, the Pivot sits on a shelf out of the way waiting to film when it senses motion. 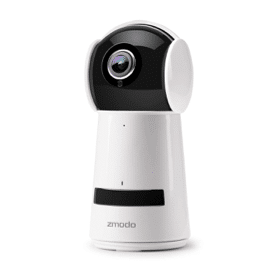 A distant cousin of R2D2? With a holographic video projection option? Maybe next model.

When set to away mode, it springs to life and films when motion sensors activate the device. You get an alert and can watch live, and even pivot the camera to rotate the view on a horizontal plane.

With a long-range night vision measured at 98 feet, Zmodo’s provides 1080p HD video day or night, wirelessly on a 2.4Ghz or 5Ghz WiFi network. The solid design is built to withstand the elements and provide clear sharp video images in all conditions. Starting at $79 for a single camera, the Extended Night Vision lives up to its name, giving you confidence in the clarity of your security camera vision.

An 8-channel Network Video Recorder (NVR) security camera system from Zmodo comes with 8 HD wired cameras, one repeater and 1 TB memory as a package for $359.00 on the company’s website. Monitor parking and building exterior areas as well as hallways and common areas in the office with eight cameras on one system. Each camera records 1080 pixel video at 25 frames per second for high-quality images, day or night. 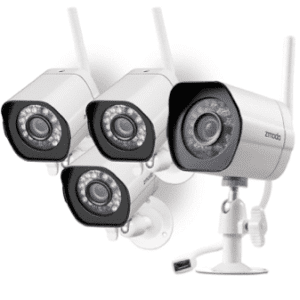 All eyes on business. Get a 4 or 8-channel system set up and running, quickly.

Getting It Up and Running in Your Home

Zmodo is introducing a new model on Kickstarter with a lure of a 60% discount for support through the crowdfunding site. Designed for ultra-simple installation, the company sets out five simple steps to get the “minimalist design” of the Snap Pro set up and going in your home:

With 1080p video and alerts to your smartphone or device wherever you are, you get a 180-degree clear view of all the action at home all the time. Anytime motion sensors detect movement you know of it, and you can use the two-way talk feature to tell an intruder to get out in a stern voice or remind the dog to keep off the sofa. Promising a battery that “lasts an entire season on one charge,” Zmodo makes it easy to replace and recharge batteries. With an extra set or two on hand, you always have fresh batteries charged up to go another season.

For a more active viewing experience, including control over the angle and direction of the camera, the Zmodo Panda offers some exciting options. 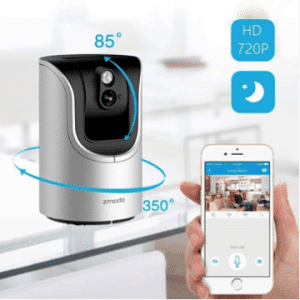 Use the Zmodo app to a pan and tilt your home surveillance camera remotely.

Control the camera remotely through the app and you have the ability to pan (spin the camera around side-to-side, diagonally) and tilt (lift and lower the angle of camera vision, vertically) to get a better view of things at home.

Indoor and (Some) Outdoor Use

The IP54 rating says the Snap Pro isn’t meant for hardcore weather conditions. It is, however, rated for a temperature range of 14 to 122-degrees F, and the company says that it can handle some moisture and brave the elements and keep on going strong. The Snap Pro is available on the company’s website in a money-saving package with two cameras and one hub for $279.00, and the company promises more savings on its Kickstarter page for a limited time.

The well-named Sight 180 from Zmodo gives you a 180-degree field of vision to see a wide semi-circle of space around the camera in your room. You can set the sensor for motion detection within the 180-degree field of vision and get alerts and video review of things moving when you are away from home, or even in the other room or outside in the yard. Like other Zmodo cameras, the Sight 180 has 2-way communication built in, so you can talk and listen to anyone in the room from wherever you are at.

About the Zmodo Smart App

Many customer reviews praise the simple functionality of the Zmodo app, which is made to work with all the company’s products smoothly. Download it to start the installation, and the process is designed to be fully automated from there, even adding additional cameras or sensors automatically when you set them up and turn them on. 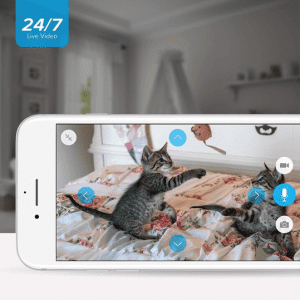 Monitor cats 24/7 from wherever you are with the Zmodo app.

Get alerts and notifications of movement or events at home, turn on or off the cameras or sensors, even get health updates of conditions at the house such as temperature and humidity with the app. You can download it on Android or iOS free of charge.  The Android version does average only a 3-star rating out of 6,000+ reviews, hopefully, this is something they will work on. 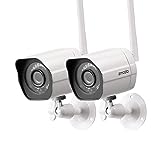 For a lot of simple security uses around the home or office, Zmodo cameras and sensors are designed to be easy to set up and operate. The universal app gives you a lot of control over viewing and setting the devices remotely from wherever you are. It is a great addition to a home security system but should not be considered a security system in and of itself.

Basic cloud storage allows you to review video clips up to 36 hours in the past, while paid plans to extend the review time to 7 or 30 days. Check into the company and its reputation online as you find the security and sensor package that is right for you and your home.